Turn Your Old-school CRT Into A YouTube Media Player

Ever wish you could enjoy modern conveniences like YouTube in a retro world of CRTs and late 20th century graphics?

[Johannes Spreitzer] happened to find an old VIENNASTAR CRT (cathode-ray tube television) made by the Austrian brand Kapsh at a flea market. The CRT dates back to 1977 and uses just RF input, making it useless as a modern television set since most TV stations nowadays broadcast primarily in digital. 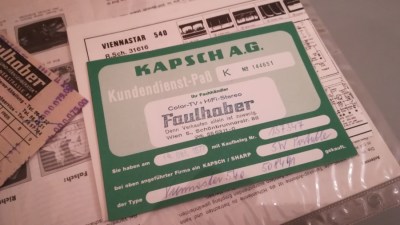 However, HDMI-to-RF transmitters do exist, making it possible to convert HDMI signals to RF or coaxial cable output to replace an antenna signal. What [Spreitzer] did next was to plug in a Chromcast and essentially convert the CRT into an old-school monitor. You can see some of the trippy graphics in the video below – the video samples shown fit the retro aesthetic, but I’m sure there’s video combinations that would seem pretty out of place.

HDMI-to-RF adapters are pretty easy to pick up at a hardware store, and they allow you to project videos onto specific channels on a CRT. Needless to say, they don’t work the other way around, although since there are still televisions that only pick up RF broadcasts, coaxial to HDMI adapters do exist.